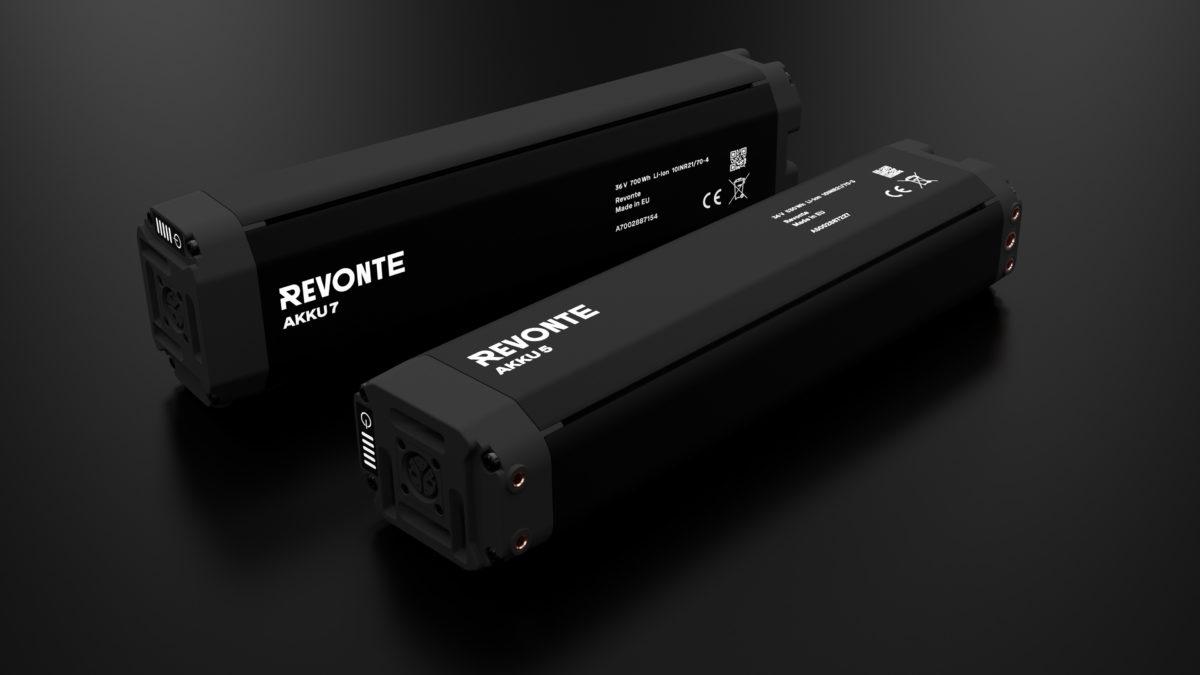 Read further what makes the AKKU the most advanced e-bike battery in the market.

A high degree of configurability runs deep in the core of the Revonte ONE Drive System. Consequently, we wanted to keep this overarching principle in mind when designing our battery. It would make little sense to design the most configurable and advanced e-bike drive system on the market only to later limit its capabilities by an additional component.

Needless to say, we are very pleased with the final product and the Revonte  AKKU crossed all the boxes it was intended to, and even more. In the following, we cover the main features found in Revonte AKKU and why it’s the most advanced e-bike battery in the market.

From the start, it was decided that two models will be offered in order to fulfil match every use case and price point found in the market.

Looking for a more affordable bike and long-range isn’t on top of your priorities? Then a battery with a smaller capacity will serve its purpose more than well and it makes little sense to pay extra for the energy storage capacity which isn’t needed.

On the other hand, if long-range and ample battery capacity is of the essence, then it’s best to choose a model with the biggest battery possible, and this is where the Revonte AKKU truly shines with its Smart Linkin Feature which is covered later.

The two models are named according to their capacities. The AKKU 5 has a capacity of 530Wh, whereas the AKKU 7 boasts a capacity of 705Wh. Both models use the latest 21700 Li-ion cell technology which ensures long battery life, and excellent properties when it comes to charging and high discharge currents. The latter is vital for high power peaks and high-torque situations of which the Revonte ONE Drive Unit is capable of.

Lot’s of functions and configurations with a minimal amount of product variants. This is the ethos of the Revonte ONE Drive System and the fact that the ONE Drive Unit can be fitted to any type of e-bike, whether it’s high performing e-mtb, commuter bike or cargo e-bike, is a testament to that. All the finer tuning and configurations are done solely by software.

Both AKKU 5 and AKKU 7 share the same physical dimensions to keep the possible product and design variants at a minimum. This is especially beneficial from a bike manufacturers point of view since there’s no need to modify the battery compartment and interface of the frame depending on which AKKU model is used.

Besides this, the end-user has the freedom to upgrade to the larger AKKU 7 model later on, if more range or just longer timespans between recharging are to be desired.

Last, but definitely not least is the Smart Linking Feature which makes the Revonte AKKU a true outperformer in the e-bike battery game. Thanks to the forward-thinking battery management system, BMS for short, up to four AKKU batteries can be connected in parallel, thus bumping the overall energy storage up to over 2.8kWh!

This amount of energy will keep a cargo e-bike going a full work shift will still leaving some “juice” in the tank. Ample battery capacity enabled by the Smart Linking Feature will benefit more conventional bike types as well. For example, embedding two AKKU’s in the downtube of a traditional e-bike produces a combined battery capacity of 1410Wh, which has been unheard of until now.

Sure, it does come with some additional weight, but in applications where exceptionally long ranges are high on the priority list, this is an option that can be built without any additional components or parts. All the “smarts” are already included in the highly developed BMS.

A Result of Collaboration

The Revonte AKKU was developed in collaboration with AKKU Vision GmbH, a leader in battery development from Germany.

The end product and especially the features it offers distinguish it in the market by a clear margin: latest Li-ion cell technology, easy customization for e-bike manufacturers, and the Smart Linking Feature which can be found only from the AKKU-powered Revonte ONE System.

One Drive System with many possibilities to power it. Choose the one that suits your needs the best.