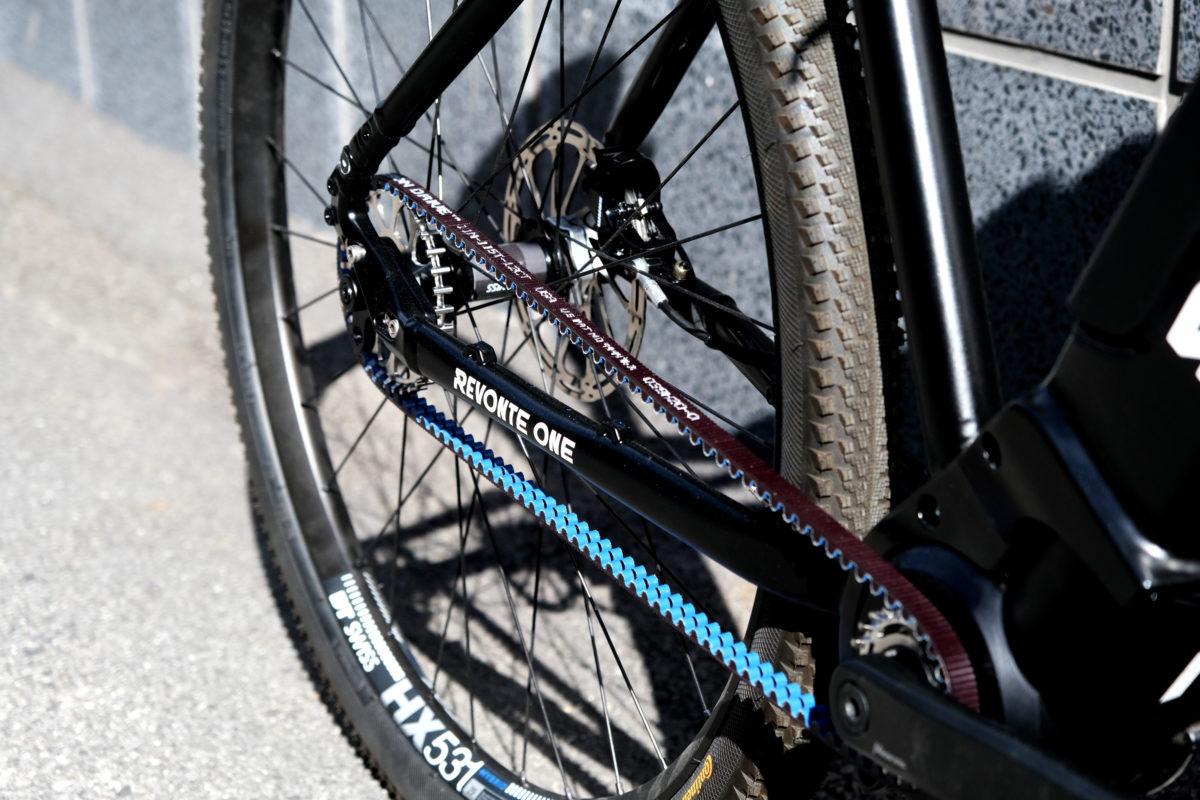 A lot can be said about bicycle drivetrains – and even as much has been done in order to make it more simple, efficient, compact or lightweight. True breakthroughs have been a rare delicacy despite the considerable effort that has gone into improving bicycle drivetrains. That has been the situation until now, before the advent of the Revonte ONE Drive System and the ingenious and remarkably simple drivetrain solution it employs.

Read further to learn why single-speed drivetrain is the winning solution in e-bikes in every way.

Freedom of design. The simple structure of the single-speed drivetrain frees a lot of real estate around the bottom bracket and the rear axle. This in turn enables designs that would be out of bounds with traditional derailleur setups.

Take our partner Lavelle Bikes for example. Their single-sided rear triangle is a prime example of a high-level design that takes advantage of this possibility. The end result is a true eye-catcher.

Simple, even elegant looks. Even though bicycle design isn’t a beauty pageant, the looks do matter. Getting rid of the protruding, and sometimes even obscure-looking, rear derailleur makes bicycles a lot more pleasing to the eye.

It’s not a coincidence that there’s a certain pull or attraction towards track and fixie bikes, and we bet that part of it is because of the simple looks and structure. Now the same feature can be found in e-bikes as well.

Robust and reliable. How many times have you had “a mechanical” during a bike ride, e.g. meaning a failure of some drivetrain component? The odds are that at least once, and most likely the correct answer is a lot more than that. The single-speed drivetrain isn’t bombproof, but it’s more reliable and robust by several magnitudes than the current derailleur systems.

Clean shifting. When you shift from one gear to the next or jump over many gears at once, it should not be accompanied by a sound that something is exploding in the drivetrain. Interestingly enough, this is the situation with current drivetrains, especially when electrical assistance is involved.

The automatic and stepless operation of the Revonte ONE Drive Systems makes these destructive and expensive-sounding gear shifts just a distant memory in the past. And it gets even better than that; the automatic mode takes up the shifting duties so that the rider can focus just on the ride itself!

No need for adjustments. Stretched out cables, misaligned gear hangers, and the usual culprits that plague the traditional drive systems are another distant and unpleasant memory when using the Revonte ONE Drive System. The drive system is controlled fully electronically, so there are no mechanical parts that need to be adjusted over the bike’s lifetime.

A lower barrier for simple repairs. If you’re not an avid cyclist, a relatively simple repair like a tire replacement can be a daunting task because of all the components and moving parts involved. The simple single-speed drivetrain makes all the repairs and maintenance more simple by several factors!! In other words, you don’t need a PhD in bicycle mechanics to up for the task.

Optimal weight distribution. When it comes to bicycles and other human-powered vehicles, weight does matter. One could argue that where the weight is located matters just as much. With the Revonte ONE Drive System the weight distribution is as optimal as it can get – low and in the middle of the bike. This brings several benefits related to the ride characteristics of the bike and smaller unsprung mass when it comes to full-suspension e-mtb’s.

Longer service intervals. Narrow chains and cassettes consisting up to dozen cogs are prone to wear and tear caused by regular use, no matter how dutifully the drivetrain systems are kept clean. With the Revonte ONE Drive System and the single-speed drivetrain it employs, the service intervals can be significantly lengthened – just clean and lube the chain once every 1-2 weeks, and you have your bases covered.

If one is looking for an especially care-free solution, then a belt drive provides a very tempting option. “No grease, no rust”, as they say at the Gates – the leading belt drive manufacturer. According to testing performed by Gates, a belt drive can handle as much as twice the mileage compared to a chain.

Affordable spare parts. When you have a simple chain (or a belt for that matter), one chainring and one cog, replacing even the full drivetrain become much, much more affordable compared to traditional solutions. Less time and money spent on servicing is a plus on our books!

A very high degree of compatibility. The number of standards and the lack of cross-compatibility is nearly a laughing joke in the bicycle industry.

Can you fit this cassette on this type of freewheel? Yes, if you replace the driver, buy these two adapters, and purchase a different chain

A conversation like the above is almost too commonplace. With the single-speed drivetrain, the cross-compatibility issues become nearly obsolete. Just get a chainring and a cog in the correct sizes, install the chain (or purchase a belt) in the correct length and you’re off to the races.

A high degree of compatibility not only makes life easier for the end-users, but also for the bike manufacturer. Fewer product variants mean smaller and simple inventory.

In a way, it’s been a full circle. The application of chain drive into a bicycle marked the revolution of modern bicycles which we are still witnessing today. Over the decades, the number of cogs on the rear cassette increased within the available space constraints. The latest evolution of bicycles is characterized by the addition of electric assistance and dropping the number of chainrings and cogs back to one.

Make no mistake, though. A simpler solution does not equal fewer features or poorer ride characteristics. Welcome the Revonte ONE Drive System and the new era of e-bikes.